7 Reasons to Visit the Gold Coast this Winter 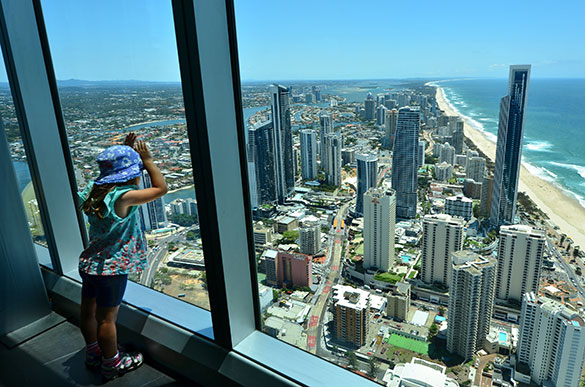 It’s a safe bet that the first things that spring to most people’s minds when they think ‘Gold Coast’ are sun, sea, sand, surfing, and swimming.

But there’s actually a lot more to this beautiful part of the country than just the five S’s. If it’s too cold to hit the beach all day in the winter months, there are a whole host of other activities to enjoy, for grown-ups and kids alike.

Here are our top picks of things to see and do:

Not only will you get to ascend to the top of the one of world’s tallest towers in a super fast elevator (expect butterflies in the stomach), but once you get there you will be afforded stunning 360 degree views of the countryside and beaches beneath you.

If you fancy lunch or a coffee, while you’re there, visit the café and bar on Level 77.

About half an hour’s drive northwest of Surfers Paradise, along the M1, you’ll find Dreamworld, the largest theme park in Australia and guaranteed to be fun for all the family.

The huge site is made up of 13 different ‘worlds’ ranging from thrilling white-knuckle roller coasters and attractions like ‘WipeOut’ and ‘The Giant Drop’, to enchanting animal encounters and shows, including feeding and walking with feline predators on Tiger Island.

Set a whole day aside and make the most of all that’s on offer.

Just a few minutes drive from Dreamworld, pull in at this great Go Karting venue. It features tracks that emulate world famous sites like Le Mans. There are options for all ages, and it’s run by members of staff that are mostly enthusiastic racers themselves.

Visit Hollywood on the Gold Coast. Well, not really, but there are a number of film studios at this theme park, including one where the 2003 version of Peter Pan was filmed.

In addition, you’ll find movie-themed attractions including roller coasters and water rides. Little ones are sure to love the costumed characters they will encounter whilst walking round, including Batman and Scooby Doo.

Open every day between 9am and 10pm, this great little venue offers three courses with 18 holes each. Play the ‘Jungle Trail’, ‘Fun Run’, and ‘Waterways Cove’ and expect to encounter exotic animals, strange obstacles, and get wet during one of your golfing adventures.

Under the Circle on Cavill building in central Surfers Paradise.

This cool location offers a lot more than bowling alone (although it has great lanes, too). There’s a cocktail bar, pool tables, and karaoke suite. You can also participate in one of Australia’s latest crazes: escape rooms. Teams are trapped in a room for nearly an hour while they take part in an exciting interactive game to try and escape. Prepare to enter a world where everything around you could be a clue and you will need to find hidden objects, solve riddles, crack clues, and beat the clock to escape.

With so many exciting things to do on the Gold Coast in winter, we guarantee you won’t even notice that it’s too cold to swim at the beach.